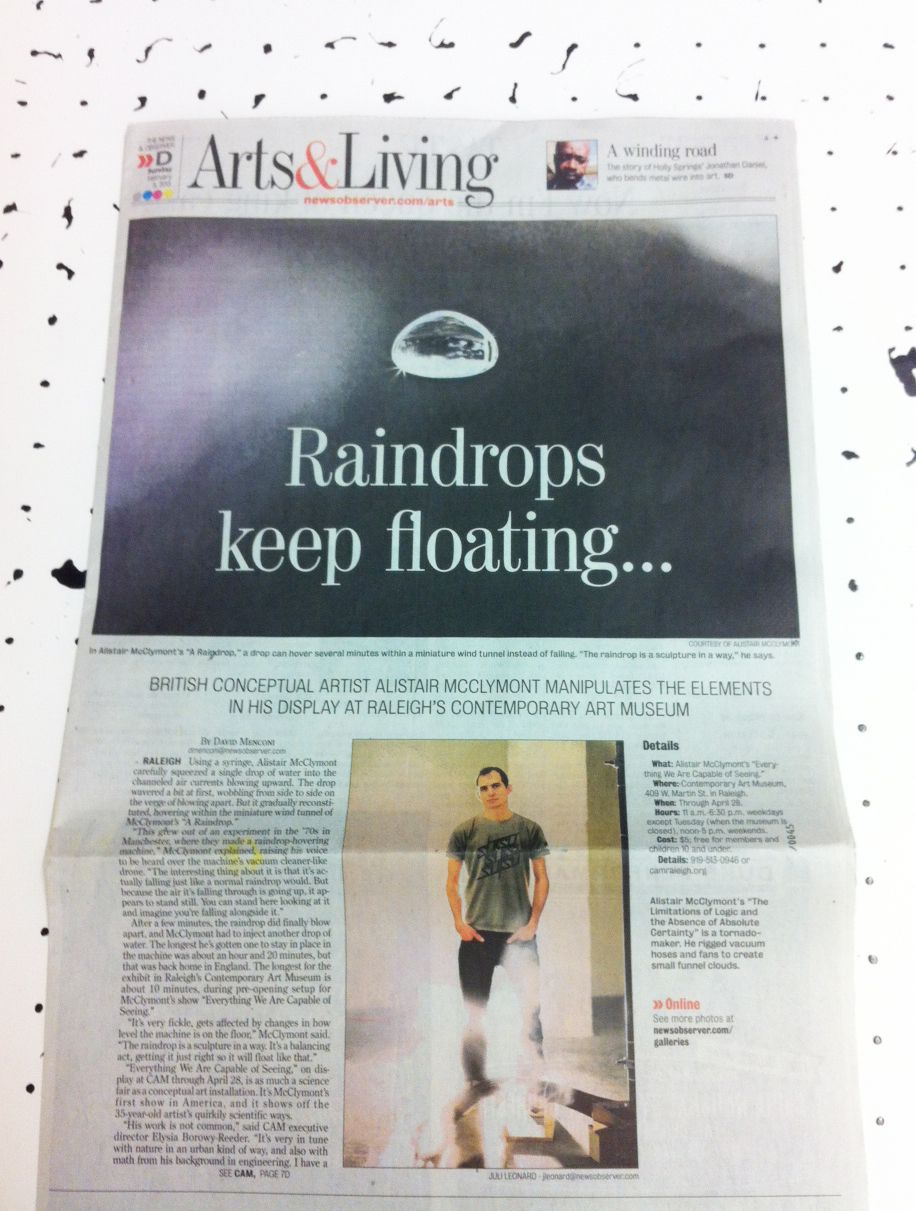 RALEIGH—Using a syringe, Alistair McClymont carefully squeezed a single drop of water into the channeled air currents blowing upward. The drop wavered a bit at first, wobbling from side to side on the verge of blowing apart. But it gradually reconstituted, hovering within the miniature wind tunnel of McClymont’s “A Raindrop.”

“This grew out of an experiment in the ’70s in Manchester, where they made a raindrop-hovering machine,” McClymont explained, raising his voice to be heard over the machine’s vacuum cleaner-like drone. “The interesting thing about it is that it’s actually falling just like a normal raindrop would. But because the air it’s falling through is going up, it appears to stand still. You can stand here looking at it and imagine you’re falling alongside it.”

After a few minutes, the raindrop did finally blow apart, and McClymont had to inject another drop of water. The longest he’s gotten one to stay in place in the machine was about an hour and 20 minutes, but that was back home in England. The longest for the exhibit in Raleigh’s Contemporary Art Museum is about 10 minutes, during pre-opening setup for McClymont’s show “Everything We Are Capable of Seeing.”

“It’s very fickle, gets affected by changes in how level the machine is on the floor,” McClymont said. “The raindrop is a sculpture in a way. It’s a balancing act, getting it just right so it will float like that.”

“Everything We Are Capable of Seeing,” on display at CAM through April 28, is as much a science fair as a conceptual art installation. It’s McClymont’s first show in America, and it shows off the 35-year-old artist’s quirkily scientific ways.

“His work is not common,” said CAM executive director Elysia Borowy-Reeder. “It’s very in tune with nature in an urban kind of way, and also with math from his background in engineering. I have a particular affinity for art that’s not just one discipline, and I like the way he problem-solves. He built a tornado machine that’s a work of art, and it produces drawings which are also art.”

A rush of awe
A recent afternoon found McClymont at CAM setting up the exhibit’s title piece. “Everything We Are Capable of Seeing” uses light and mist from an agricultural irrigation system to make rainbows.

“I’ve always been interested in the fringe of what might be discerned as art, partly from interests in physics, engineer- ing and math,” he said. “When I went off to university, I thought perhaps I’d go into engineering before deciding that art would give me the most freedom to make whatever I wanted. I just like making things, experimenting and play- ing around with them.”

The show’s title refers to how much of the light spectrum the human eye can see (a very small slice) and how much it in- fers. McClymont typically sets about creating an experience that is familiar and not necessarily thought of as art.

“There are classical art ideas and scientific ideas,” McCly- mont said. “The crossover between those two is an interest- ing place, and that’s where a lot of my art is. It allows you to explore these things that are quite beautiful in a traditional artistic sense, but the ideas behind them have beauty as well. To see the rainbow is to see the beauty, but to understand it as well. The water falls, you have to be at just the right angle to see the rainbow – there is beauty in understanding the process, too. I’d equate it to looking up at stars, which stop becoming just patterns of light when you understand the distances involved, suns, atmospheres. There’s a rush of awe in that moment I quite like to explore.”

The distance between heavenly bodies also figures into one of the show’s most striking pieces, “Eclipse,” which stretches 66.6 feet along CAM’s main-gallery western wall. Consist- ing of 100 8-by-10-inch sheets, it depicts the sun, moon and earth lined up in an eclipse. What’s unusual is that all three objects and the distances between are shown to scale, which is why it takes such a large expanse of wall.

“I had an idea for this piece and thought there was no way I could ever show it anywhere because it’s just too big,” McClymont said. “Then this came along, one of the very few places where you can show something like that. It needs to be this size to work. Any shorter and the earth and moon would be too small to see.”

Weighty precision
Other pieces are surprising in what they reveal. “Inflated Steel Forms,” which look like oversized pillows made of chrome, assumed their shape from welded steel being inflated with air – and bending them took less than what is in most automobile tires, about 25 pounds per square inch.
 
The smallest piece in the show is “15,450 Milligrams of the Evian Mountain” – a glass of limestone residue accumulated from boiling down the contents from a mountain of bottles of Evian water. In a bit of playfulness, McClymont positioned it in the middle of a big empty space.

Mathematical constructs including prime numbers and the Fibonacci sequence figure into two pieces made from medium-density fiberboard. “Prime Bench” lashes together 100 large sheets, with boards sticking out at intervals repre- senting prime numbers from one to 100. “Oak Tree” con- sists of sheets arranged into a pattern related to the way an oak would actually grow, resembling a cross between a tree stump and a snowflake.

“The idea of an oak tree is massive weight and presence, and it’s the archetypal tree in England and also North Carolina,” McClymont said. “When I first came here and saw all the oaks, I thought, ‘This place will be perfect for this.’ ”

Both “Prime Bench” and “Oak Tree” weigh more than 1,000 pounds, which makes for a labor-intensive setup – especially since McClymont tries to do as much as he can himself. The whole show is a balancing act that makes the viewer aware of both the physical work involved, and the precision of lin- ing everything up just so to produce the desired effect.

Perhaps the best example of that balance is “The Limitations of Logic and the Absence of Absolute Certainty,” which is a tornado-maker. McClymont rigged vacuum hoses to spout water vapor through a space with fans to create small funnel clouds.

Process makes the art
That’s very cool, but the “drawings” produced by the tornado are even cooler. McClymont places drops of ink onto a piece of paper, and the tornado blows the ink into patterns.

“Limitations...” isn’t the only piece in the show that works on multiple levels. A photograph of an airplane wingtip is posi- tioned near the “Inflated Steel Forms” to reflect off the shiny steel surface. And “A Raindrop” includes a series of photos taken through the hovering drop of water, treating it like a lens through which to view an upside-down world.

“Some of these were simple to do, just out of the idea,” McClymont said. “Others like the raindrop took about two years of tinkering to make them work. A lot of what I do is about the phenomenon of creating an experience that is familiar in some ways – things that exist like rain, wind and tornadoes. It starts with an idea, then there’s the process of making art out of it, then it gets out of my control and becomes what it’s going to be. I make the system for the process, and then the process actually makes the art when nature takes over.”

David Menconi: 919-829-4759 or blogs.newsobserver.com/beat
a version of this article appeared in print on sunday, 2/03/2013, on the cover of the news & observer arts & living section with the title: raindrops Keep Floating
exhibition information: camraleigh.org/exhibitions/2013mcclymont