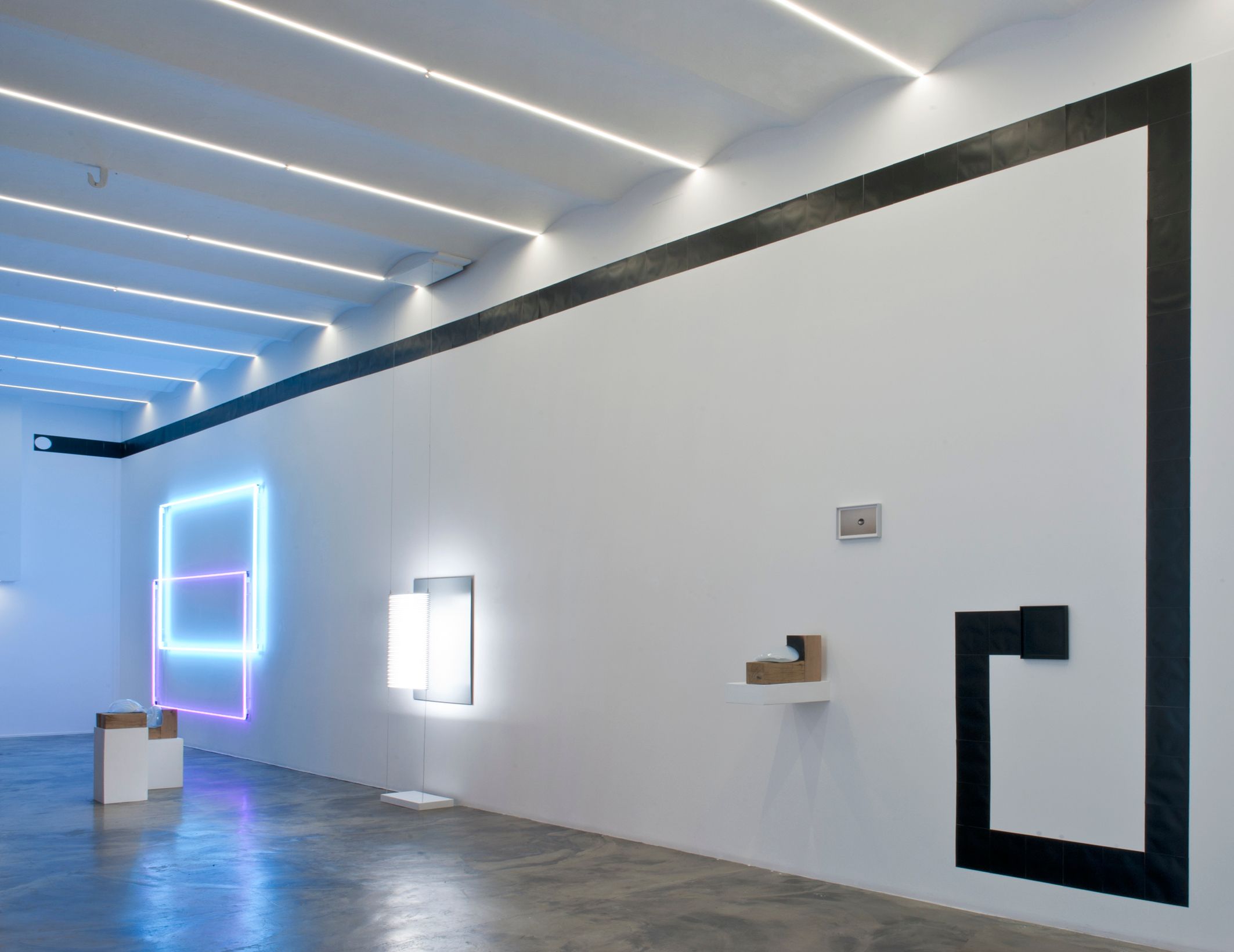 This journey is a path through light, natural, authentic, reflected, metaphoric or real – the light of reason, an awakening of conscience. Taking inspiration from the reflections of Hans Sedlmayr (Light in its Artistic Manifestations, 1960, “Studium Generale”) in which he reconsiders art historic-graphically as a sub-specie lucis, the Exhibition embraces a dialectic and multiform commitment of the luminous medium according to the heterogeneity of artistic and generational practices.

The interpretation of that energy which allows us to recognise as ours this reality surrounding us, creates new and infinite prospects, defined as Lumen, such as the splendour coming from shining things and together a measure of the flow of matter; and Ray as the technological aspect that transforms the work, from a representation of natural light to a source of photonic emissions. Lumen Ray is a timeless and free tale, subversive and mutating, a comparison between science and conscience, where the various artistic considerations expressing it, generate multi-form relationships of light/space, light/object and light/matter.

The flow blends different interpretations: from the universal of Alistair McClymont in the “astronomical” description of Eclipse (2012), a black/white sequence in real relationship of light between Sun-Earth-Moon and, again, light-time in Unix Time, as an alternative to the Gregorian calendar in i-Pad version to the divertissement of “reflecting” reflections in which energy is sometimes “caught” and then “released” by the fluorescence of Yari Miele and placed next to the instantaneous painting of Matteo Fato. From material to immaterial, the ray filters with elegant motion through the virtual openings of Grey Area (2013) of the English collective United Visual Artists to then broaden out into a sky spectrum and solidify into Light (2013) by Raul Gabriel invading with its own weight the Exhibition area, up to its self-denial that, in the end, will cancel it out with a simple gesture of alchemical painting in makeitpossible (2013) by Ivano Sossella.

From two-dimensional to three-dimensional, a drop of light solidifies in Bubbles (2012) by Morgane Tschiember, while the neon portions of Lori Hersberger become explosive effects through the irony of Bomb by Tony Oursler. Among fluo touches curious glances follow the scene as it darkens during the performance of Why Be Blue (2012) of French artist Guillaume Leingre whose mark is impressed as though in a dark room, leaving in half-shadow a message of double reflection in The End (2012) by American James Clar.

James Clar (1979, Wisconsin, USA) leaves and work between New York and Dubai. As a media artist, he bases his aesthetic research on the light as support, subject and object and the technological potentials that get changed in the pop culture.
His works are included in museums and both public and private collections such as: the Museum On The Seam, Jerusalem, the MOMA, New York,, the Chelsea Art Museum, New York, the New Museum of Contemporary Arts , New York, the Museum of Science and Innovation, Tokyo, La Triennale, Milan, the Susan e Michael Hort Collection, New York, the Borusan Contemporary Art Collection, Istanbul, the Salsali Collection, Germany and the Farook Collection, Dubai. James Clar took part also to Japan Media Arts Festival and il NHK Digital Arts Festival in Tokyo, Seoul Design Festival in Seoul and Festival of Light in Lyon. He was also artist in residence for: Technology Research Institute, FedEx Insitute of Technology, Memphis; Fabrica Research Facility, Benetton’s Design Research Facility, New Media Art Institution, Eyebeam Atelier, New York.

Guillaume Leingre (1971, Paris, France) lives and works in Paris (France). «I move through production patterns, appearance and reception of images » says Guillaume Leingre. This statement points out a radical direction in the use of photographic material, blowing up the traditional surface of the images. Over the last years, Leingre has been tearing apart the photographer’s role and photography imagery through series like Portraitiste de France (2003-2007), actions, and writings. He has been breaking consciously and patiently all the rules, cutting loose from the photography family, showing off the naked roots of a grateful inheritance of the Dadaists, the Conceptualists, the Minimalists, Fluxus… He seeks to create works using constrained conception and production techniques with a great knowledge of both historical and contemporary contexts. On February 12th, at Jérôme Zodo Contemporary, Guillaume Leingre will perform a new version of Why be blue : a white room, make it dark by bringing down the iron curtains, and turn off the lights. In this darkness, a strip of pristine white photographic paper is held up vertically, alongside a wall, with a found object (for example, a scraper, a scaffold ladder). Bring up the iron curtains, turn on the lights. The paper turns blue, shapes (those of the objects) remain in reserve, white. The day after, all is blue. Why be blue, is part of LIVE, a larger body of work based on photography and action. Guillaume Leingre was artist in residence at the Villa Kujoyama (Kyoto) in 2008. Since 2011, he collaborates with France Culture and the Atelier de Création Radiophonique, to produce sound pieces (Le Musée radiophonique, Est/Ouest, d’après Sur le Chemin des Glaces). Art critic and author for 20/27, Particules or MAMCO (Geneva), Guillaume Leingre launches in 2013, Bloom, a dealing platform for exhibition catalogues, books and artist’s books, and all kind of documents from 60’s to 80’s artistic avant-gardes. He is represented by Super Window Project.

Alistair McClymont (1978, in Harlow, UK) lives and works in London, UK. After graduating from the Royal College of Art in London, it was announced on the European art scene for his scientific experiments, famous for his Limitations of Logic and the Absence of Absolute Certainty, a scale model of a real tornado. Alistair McClymont has participated in several art exhibitions in galleries and institutions including: the Art Foundation in London, Dundee Contemporary Arts Dundee (Scotland), the Laboratoires Le Paris and the Centro de Arte Dos de Mayo in Madrid. His works are in public collections, including the Gibberd Garden in Harlow (UK). During the months of February and April 2013 will present a great staff at CAM Contemporary Art Museum in Raleigh, North Carolina, USA.

United Visual Artists (UVA, 2003, London, UK) is a collective soul born of different personalities and backgrounds: visual arts, architecture, design, communication, computer science and engineering. Their artistic practice combines a variety of methods, always performative and sculptural, with the highest and most innovative architectural technologies, interactive and then digital. Worldwide renowned for their monumental light installations, they will present for the first time in Italy, a new installation Grey Area, indulging in a more intimate space, without forgetting the most engaging of their artistic research. The work of UVA has been presented in several international institutions: the Victoria and Albert Museum, London; the Tate Modern Turbine Hall, the Serpentine Gallery, Madison Square Garden in New York; the Royal Academy of Art, the South Bank Centre, the Wellcome Collection, Opera North Leeds, Durham Cathedral, The British Library and the National Maritime Museum, London. There are also several public works in the cities of London, Bristol, Toronto and Istanbul. In 2007, the interactive installation Volume received the well-known prize Yellow Pencil D&AD Awards, they later found the recognition of the London Design Museum as ‘Designs of the Year’ in 2008 and 2010. In 2010 their kinetic installation Chorus was awarded in the 2010 edition of the Prix Arts Electronica. UVA have also collaborated with musicians including Massive Attack, Jay Z, The Chemical Brothers and Battles.