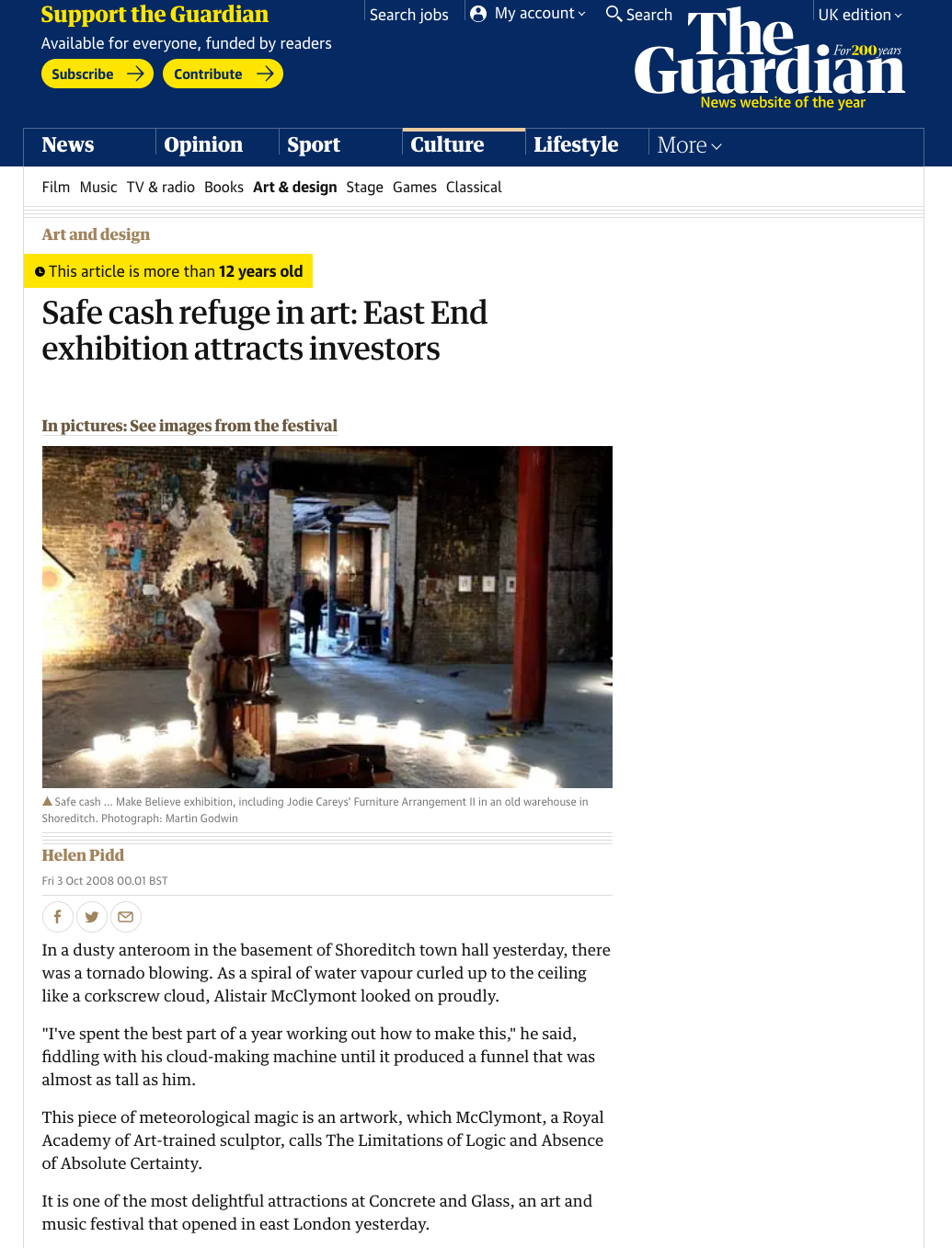 In a dusty anteroom in the basement of Shoreditch town hall yesterday, there was a tornado blowing. As a spiral of water vapour curled up to the ceiling like a corkscrew cloud, Alistair McClymont looked on proudly.

"I've spent the best part of a year working out how to make this," he said, fiddling with his cloud-making machine until it produced a funnel that was almost as tall as him.

This piece of meteorological magic is an artwork, which McClymont, a Royal Academy of Art-trained sculptor, calls The Limitations of Logic and Absence of Absolute Certainty.

It is one of the most delightful attractions at Concrete and Glass, an art and music festival that opened in east London yesterday.

Featuring more than 100 bands and 20 commissioned exhibitions across 35 venues, this two-day event is an attempt to marry two art forms for which east London is famous.

The area is home to Tracey Emin and Gilbert and George, and has produced numerous bands, from the Libertines to Bloc Party.

"There are so many galleries and music venues in this part of London, it made sense to bring them together," said the promoter, Tom Baker, who dreamed up the idea last year while admiring the Manchester International Festival. He hopes it will become an annual fixture, and sees it as a cross between Texan music festival South by South West and the Venice Biennale.

Though it may seem decadent to hold such an event in these times of financial hardship, it is also canny. "We've sold half of our exhibition already. Art seems to be the only thing people feel safe buying," said Tot Taylor, whose Riflemaker gallery, normally based in Soho, is running an exhibition called the Glass Onion Shop in a former school house.

Taylor is showing the most famous artists at Concrete and Glass, including a rather beguiling portrait from Gavin Turk, which sees the artist's face merge with Elvis on the glass of a screen printing panel, and I Love U, a participation painting from Yoko Ono, which offers visitors the chance to add a few brush strokes of their own.

But Concrete and Glass is more about new artists, and in the raised green bandstand at the Arnold Circus is one of the festival's more esoteric attractions. To create the sound installation Rubble Music, Thor McIntyre-Burnie has recorded the sound of the earth moving underneath the bandstand.

Perhaps the most way-out event will come tonight at 8pm, when a Finnish accordion player, Kimmo Pohjonen, will premiere his collaboration with a bunch of Essex farmers, who will play agricultural tools including, intriguingly, a "potato riddler".