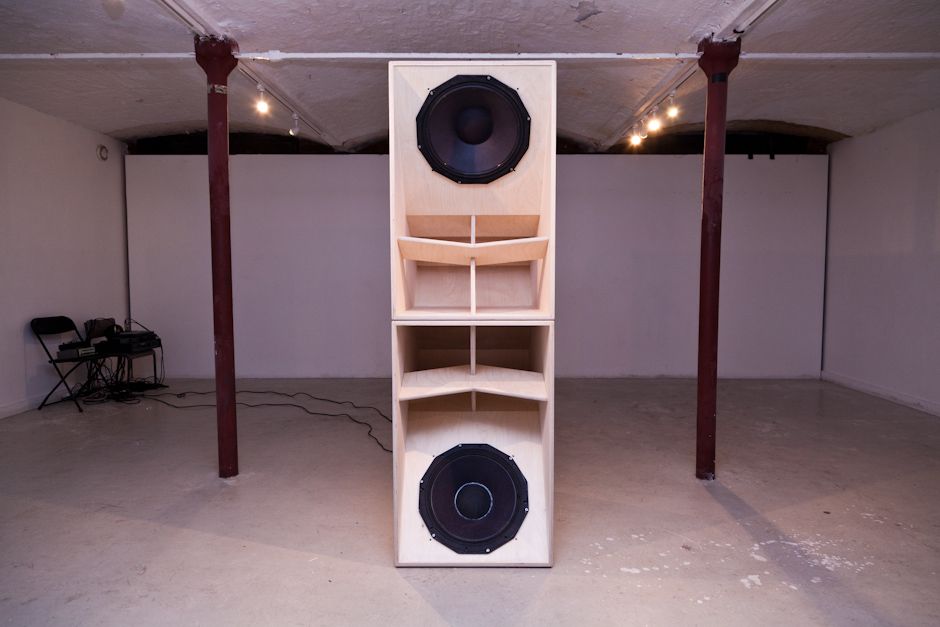 The Ghost in the Machine, Islington Mill, Salford, UK

Following the success of last year’s group exhibition ‘Brittle Crazie Glasse’, Man&Eve are pleased to announce the forthcoming exhibition of Alistair McClymont and Sophie Clements as part of their joint residency at Islington Mill, Salford.

The Ghost in the Machine brings together recent work by Sophie Clements and Alistair McClymont, and is the result of a collaborative month-long residency at Islington Mill. There is a shared interest in the close observation of natural phenomena through an altered lens that exists in the work of Clements and McClymont. In different ways, each one attempts to capture or contain an ephemeral moment, whilst at the same time celebrating the impossibility of doing so. There is also a shared enjoyment in the mechanics of production, which is often incorporated into the fi nal work and which creates a shared vocabulary and aesthetic of ‘making’ or ‘engineering’.

In the past, McClymont has built a number of ‘machines’ capable of recreating natural phenomena such as rainbows and hurricanes. He also makes work that explores the action of physical laws upon common materials, for example using pressurised air to inflate large sheets of steel that have been welded together along their seams, or allowing the rhythm of the prime number series to determine the form of an MDF structure. The finished work always acknowledges that there is something inherently unknowable and uncontrollable about the way in which the naturally occurring laws of nature affect our material surroundings. During the residency, he has built a pair of large audio speakers optimized to transmit low frequency sounds that are close to or below 20Hz, the normal limit of human hearing. At high levels of intensity, it is possible to feel these low-frequency sound vibrations in various parts of the body, and previous studies suggest that this may cause feelings of awe or fear in humans, or generate the sense of an apparition of supernatural event. McClymont has used a sub base sound system, tuned to the resonant frequencies of the gallery, to create an audio sculpture generating sound that can be felt or experienced as a physical sensation. This forms part of an ongoing project, which will also involve collaborations with sound-artists and musicians to compose works that use sub-frequencies, and to further explore the range of human
reactions to these sub-frequencies.

In many ways, Clements works in the opposite direction to McClymont. She uses natural elements such as steam, water and ice along with materials such as concrete, wood and glass, and then performs a human action upon them (smashing, incinerating, throwing) in order to create moments of drama. She repeats these actions many times, painstakingly recording the results on fi lm or video and then sculpting her footage together to create ‘temporal sculptures’. The results are powerfully affecting and always hint at a sense of loss or absence. One of the new works created during the residency is Attempting to delay the Inevitable, in
which Clements seeks to create a static cube of smoke. The work explores the futility of our human tendency towards trying to prevent or delay moments of change and disintegration, which must occur in concert with the inherent laws of natural order.

A particular focus of the residency has been to question which point in the process of production and exhibition constitutes the work? Is the performance of making, the object or ‘machine’ that supports the performance, or the final documentation of the performance or event? Clements has responded by creating a series of installations that extend the trajectories of her video sculptures (visually, aurally, spatially and temporally) to incorporate the props and apparatus involved in their production, and to heighten their immersive and affective qualities. McClymont has also responded to this question by producing a series of photographs and video works that explore the observation of changing light conditions through different man-made made materials including tarpaulin and a space-blanket. ‘The Ghost in the Machine’ is a phrase that was first used by the philosopher Gilbert Ryle to describe the Cartesian dualist account of the mind–body relationship. It was the title given
to Arthur Koestler seminal work in philosophical psychology (published 1967), which argues that the mind of a person is not an independent non-material entity that the evolution of the human brain retains and builds upon earlier, more primitive brain structures. The same title was given to an article Tandy and Lawrence (published 1998) exploring the theory that low frequency sound can cause individuals to experience what may appear to be an apparition.

The works included in this exhibition resonate with the different metaphors for the ‘Ghost’ used by Koestler and by Tandy and Lawrence. For Clements, the ‘Ghosts’ are the traces and evidence of her process, retained in the ‘present’ space of her installations, whilst at the same time articulating their dormancy and departure. For McClymont, the ‘Ghosts’ can perhaps be understood through scientific understanding and a study of infrasonics, and yet they can never be fully controlled or predicted, due to the variations in human sensitivity to subfrequencies and the other atmospheric conditions that may affect them.

Sophie Clements and Alistair McClymont are both represented by Man&Eve gallery. The residency was made possible with the kind support of Allan & Jo Melzack and the Arts Council of England and Wales. The additional help and support of the Dub Smugglers and Herbal Sessions sound systems has been invaluable.