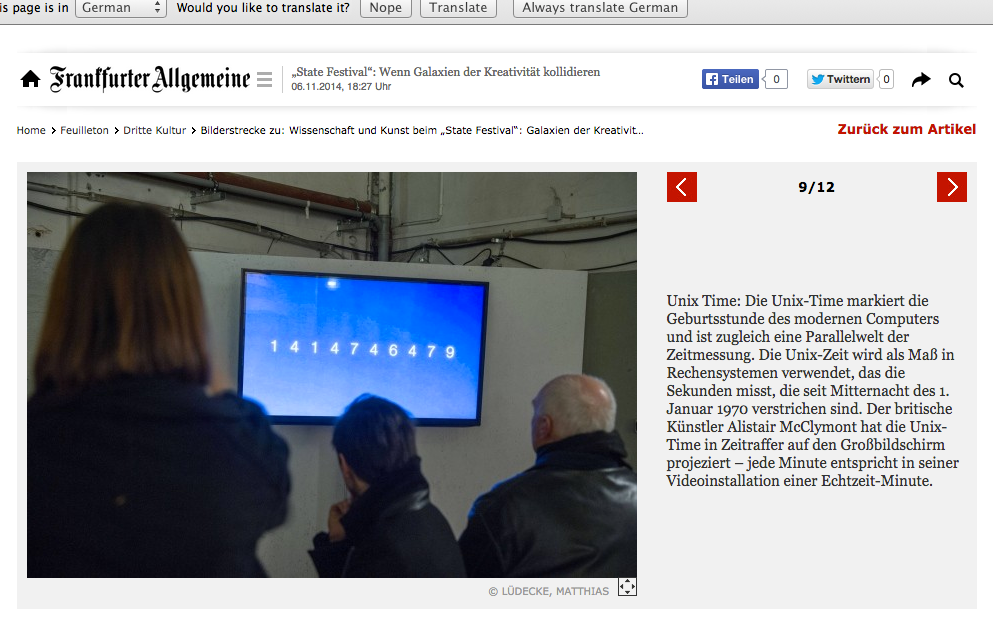 "State Festival"
When galaxies collide creativity
A spectacle of young creative scene in Berlin: The "State Festival" brought together for the first time, the art and science scene in the capital. Conclusion: An intellectual playground obviously very inspiring.

Berlin over the weekend near Alexanderplatz: an echo, so clear and loud that you could not hear - at least not if you have passed through the gate to the Old coin factory on Molkenmarkt: "The point at which two subject areas, two disciplines, two cultures - two galaxies, one might say - collide, should produce creative opportunities. In the history of intellectual activity, this was always the place where it was one of the breakthroughs. "

It is the voice of Charles Percy Snow or CP Snow, as he was also called short. His quote is from the year 1959. The English chemist and writer, had massively complained about the splitting of the two cultures, which he embodied in speech Lecture: scientists and belletristic intellectuals had any communication with each set, "because the members of the two cultures can do not talk to each other ". Should it continue to give opportunities to do so Snow, "so to speak, then they existed in a vacuum."

A festival on the theme "Time"
In the Berlin old coin you have to do as a predominantly young and experimenting third culture of this communication vacuum tries to override. On the Federal Ministry of Research financed "State Festival of Time," the first science festival that wants to use "expressive creativity" of art and music "as a vehicle" for one's own thinking and communication of research which has the ideals Snows on many levels cultured in parallel: discussion forums, interactive workshops, short film festival, performances by artists and live experiments of scientists.

The festival theme "time" it was only the substantive framework, the real motive - the creative clash of cultures - led the festival visitors coming back into the fundamental question: Is the growing complexity of the world and thought perhaps easier to place, tangible, if you the ways of thinking and world views of the two cultures as it accumulates? In other words, progress through encounter and creative communication?

The idea is not new in the book market. The New York literary agent John Brockman (edge.org) has long been a team prepared for the third culture extremely popular science writers who maintain interculturalism in their works themselves and provoke debate.

The third culture but also evolves beyond it, so it looks at least John Gorman, head of the "Science Gallery" in Dublin, to "a global movement". The key concept of the virulent for him in the English-speaking world "kind of science". In fact Gorman is currently building up along with other science managers a continent-wide network of institutions, artists and designers, which seeks creative, offensive concepts a new target audience for science communication. Fifteen plus, experience-hungry, technophile and discussion happy, that's the - educational been rather difficult to reach - Age group Gorman at least recruited in Dublin with some success. The King's College in London, there is already a partnership in 2016 to be opened there is also a Science Gallery. Six more are planned, including in Melbourne and New York.

If the science of the foothills of the economy is interwoven, this was one of the clues to the dialogues of the State festivals, why should it not be possible for art? In other words, why should the higher morality, which is associated with artistic approaches on many topics, not even for the science of benefits? Or, as Joanna Hoffman-Dietrich, art professor from Poznan and chairman of the "Art & Science Node" in Berlin, put it: "The combination of the two cultures can also be a contribution to the democratization of science." The question of power was made and therefore that point reached where Snow also threatened to despair in his concern for the science education of his time.

Attention Artists: A "Bullshit detector?
Could end the question to the intellectual supremacy, even if it is only the power of interpretation, such cross-cultural projects such as the Festival State, is currently experimenting with those around the globe, leading again to a dead end? "The scientific method accepts as a successful part of our culture" for Carsten Hucho, as Christian Rauch, the organizer of the festival, a physicist at the Paul Drude Institute for Solid State Electronics, must - and defended in doubt over art with their more emotional additions be. A "bullshit detector" is not a bad tool for the third culture. Jenny Michel, Berlin artist, on the other hand pointed to the ambivalence of this inherent rigor and own elitist perspective towards which lies in Popper's ideal of scientific knowledge access: "As an artist, I'm just more freedom to demonstrate alternative concepts to play with science." Conclusion Few centuries separation between art and science can not cancel a spectacle. The beginnings but are made.